Over the last several years St Mellons C/W Primary School has worked with the Arts Council, Wales and has become a Lead Creative School.

We have benefited from working with various creative practitioners who have collaborated with our staff and used their particular set of skills to explore and develop creative approaches to teaching and learning.

We have delivered projects with all classes in our school.  Each project is unique and is designed to support specific areas of the curriculum and aims to nurture creativity of learners.

The legacy of our creative school projects is that we continue to incorporate the 'Five Creative Habits of Mind' across the school.  These are the five habits we seek to develop: 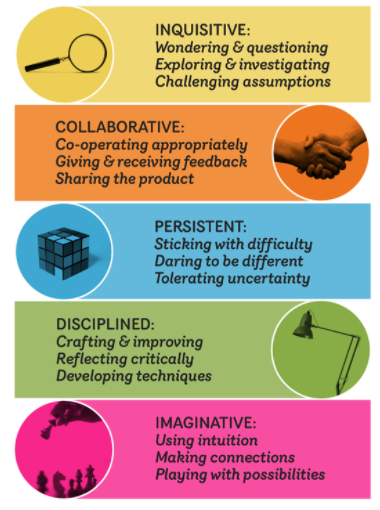 We focus on one of these habits every half term.  Pupils are encouraged to develop the habit in their school work and beyond.

This half term we are focusing on 'Disciplined Dan'. 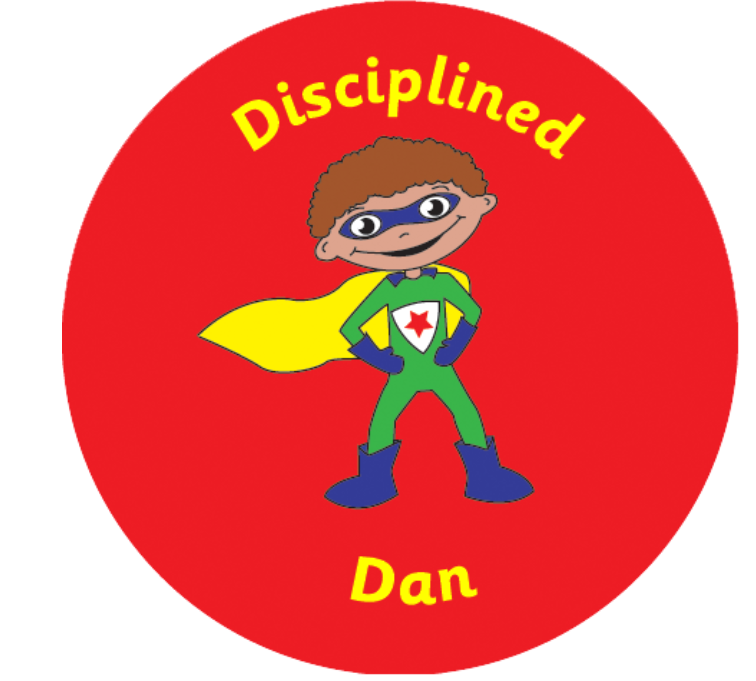 Dan loved his family, he really did, but sometimes they really annoyed him.

His dad had decided to learn flamenco dancing. Day and night he practised in the garage (which had been turned into a dance studio) that was directly beneath Dan’s bedroom. The sounds of his dad’s feet tapping out a rhythm on the wooden boards, the clatter of the castanets and shouts of, “Ole,” regularly drifted up through the floorboards. His mum loved building and fixing things (she was the one who had converted the garage into a dance studio), and from somewhere in the house Dan would hear her hammering and drilling until the house shook and his head ached. And to complete his misery, his older sister’s passion was rugby, which normally would not be an issue, but for her last birthday she had persuaded her mum and dad to buy a huge TV that she had then had fixed to the wall that separated her bedroom from Dan’s. So, whenever the Cardiff Blues or the Welsh teams were playing Dan could hear her screaming and shouting and the match commentary blaring through the walls.

The real problem was that Dan’s hobbies were nothing like the rest of his family’s. He loved to read and research about his favourite subjects - space and animals, and he also loved to build things with his Lego, and both of these hobbies needed something that was in short supply in his house - peace and quiet so that he could concentrate. So many times he would be trying to focus on what he was reading or on a really fiddly bit of his construction when the noise and sound vibrations would make it impossible for him to complete what he was doing.

One evening after a particularly frustrating day Dan was sitting alone in his room wondering what to do. As we know Dan loved his family and their hobbies made them happy so he wouldn’t want to make them sad by telling them to stop. Wearily he gazed out of the window into the night sky. “I bet it’s quiet out there”, he thought to himself. Just then an incredible thing happened. A blazing ball of light shot like a flaming arrow across the jet-black sky. Dan watched it in amazement, and as it suddenly exploded into a million tiny parts a fantastic thought struck him. “Of course,” he said, “I can’t change anything about my family, it’s me who needs to change.”

Hurriedly he rushed to his computer and started to research. Within a week several packages had arrived at Dan’s and things had started to change. Thick rugs on the floor muffled the sounds coming from below, and notice boards on the wall helped too. When he needed to, Dan wore his headphones and the rubber feet on his desk helped with the vibrations. His family carried on with their hobbies and as time went on it became easier and easier for Dave to focus on what he was doing without being distracted by them. In fact, before long having practised his discipline skills he found he no longer needed the headphones as he was able to ‘tune out’ from all that was going on and concentrate on what he needed to do. And now, if he ever does start to find things difficult, all he needs to do is look at the model of the shooting star he built and it always reminds him that the secret to achieving what he sets out to do is to leave others to what they are doing and to focus on what he’s doing instead and then they’ll all be happy and successful.